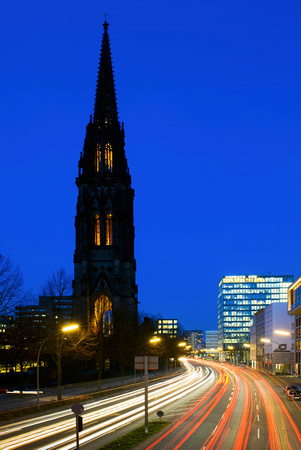 The Gothic Revival Church of St. Nicholas was formerly one of the five Lutheran Hauptkirchen in the city of Hamburg. It is now in ruins, serving as a memorial and an important architectural landmark. When Hamburg residents mention the Nikolaikirche, it is generally to this church that they are referring, and not the new Hauptkirche of St. Nicholas, which is located in the Harvestehude district.
The church was the tallest building in the world from 1874 to 1876 and is still the second-tallest building in Hamburg. The current condition of the Church of St. Nicholas is the result of air raids during World War II, continuing demolition in 1951 and restoration work in the 1990s. The Rescue the Church of St. Nicholas foundation is responsible for the restoration of the church. The clearly visible spire of the Church of St. Nicholas served as a goal and orientation marker for the pilots of the Allied Air Forces during the extensive air raids on Hamburg. On 28 July 1943 the church was heavily damaged by aerial bombs. The roof collapsed and the interior of the nave suffered heavy damage. The walls began to show cracks, yet they as well as the spire, did not collapse. The spire and some remains of the wall were preserved as a memorial against the war. They were not cared for for several decades, and, consequently, they gradually decayed. In 1987 the foundation began to restore the existing fabric of the building and erected a so-called "place of encounters" in the crypt. Since 1 September 2005, an elevator has taken visitors to a 75.3 metre-high platform inside the spire to enjoy history panels and a panoramic view over Hamburg and in particular the nearby Speicherstadt.
© Yen Baet 2010
Powered by ZENFOLIO User Agreement
Cancel
Continue