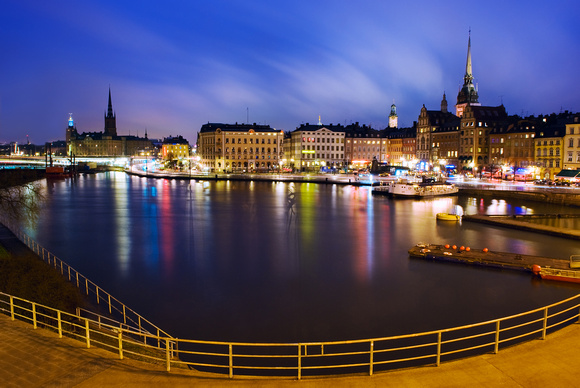 Gamla Stan is the old town of Stockholm. The town dates back to the 13th century, and consists of medieval alleyways, cobbled streets, and archaic architecture. North German architecture has had a strong influence in the Old Town's construction.

Stortorget is the name of the scenic large square in the center of Gamla Stan, which is surrounded by old merchants' houses including the Stockholm Stock Exchange Building. The square was the site of the Stockholm Bloodbath, where Swedish noblemen were massacred by the Danish King Christian II in November, 1520. The following revolt and civil war led to the dissolution of the Kalmar Union and the subsequent election of King Gustav I.

As well as being home to the Stockholm Cathedral, the Nobel Museum, and the Riddarholm church, Gamla stan also boasts Kungliga slottet, Sweden's baroque Royal Palace, built in the 18th century after the previous palace Tre Kronor burned down. The House of Nobility (Riddarhuset) is on the north-western corner of Gamla stan.
© Yen Baet 2010
Powered by ZENFOLIO User Agreement
Cancel
Continue