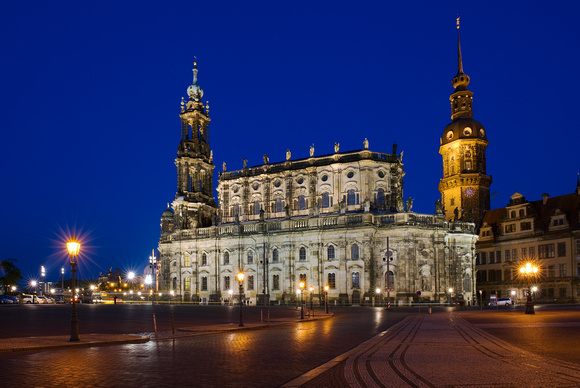 The Hofkirche stands as one of Dresden's foremost landmarks. It was built by architect Gaetano Chiaveri from 1738 to 1751.
The church was commissioned by Frederick Augustus II, Elector of Saxony and King of Poland. In the crypt the heart of King August the Strong is buried along with the last King of Saxony and the remains of 49 other members of the Wettin family as well as people who married into the family, such as Princess Maria Carolina of Savoy, wife of Anthony of Saxony.
The church was badly damaged during World War II and was restored during the mid-1980s under the East German regime. Today it is the cathedral of the diocese of Dresden-Meißen. It has Silbermann's last and biggest organ.
© Yen Baet 2010
Powered by ZENFOLIO User Agreement
Cancel
Continue