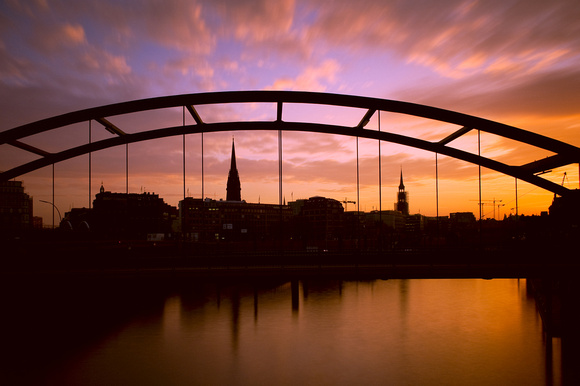 The Elbe River is one of the major waterways of central Europe. It runs from the Czech Republic through Germany to the North Sea, flowing generally to the northwest. The river rises on the southern side of the Krkonosÿe (Giant) Mountains near the border of the Czech Republic and Poland. It then makes a wide arc across Bohemia and enters eastern Germany about 25 miles (40 kilometres) southeast of Dresden. For the remainder of its course it flows through Germany. Above Hamburg the Elbe splits into two branches; these rejoin farther downstream, and the river then broadens into its estuary, the mouth of which is at Cuxhaven, where it flows into the North Sea.
The total length of the Elbe is 724 miles (1,165 kilometres), of which roughly one-third flows through the Czech Republic and two-thirds through Germany.
The major German cities the Elbe runs by are Hamburg, Magdeburg and Dresden.
The Elbe has been navigable by commercial vessels since 1842, and provides important trade links as far inland as Prague. The river is linked by canals to the industrial areas of Germany and to Berlin. Without the Elbe river Hamburg wouldnÕt be the economic power it is today.
© Yen Baet 2010
Powered by ZENFOLIO User Agreement
Cancel
Continue