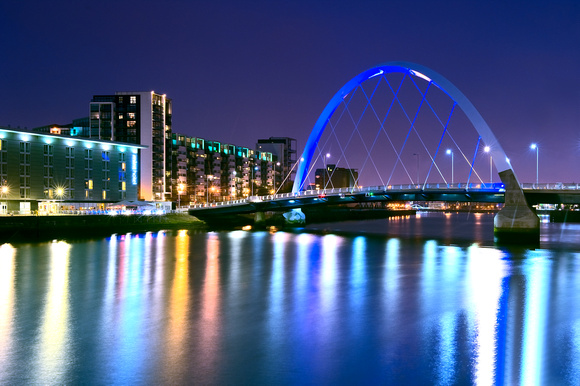 The Clyde Arc, known locally as the Squinty Bridge) is a road bridge spanning the River Clyde in Glasgow, in west central Scotland, connecting Finnieston, near the Clyde Auditorium and SECC with Pacific Quay and Glasgow Science Centre in Govan. A prominent feature of the bridge is its innovative curved design and the way that it crosses the river at an angle. The Arc is the first city centre traffic crossing over the river built since the Kingston Bridge was opened to traffic in 1969.
The bridge was named the "Clyde Arc" upon its official opening on 18 September 2006. It has been previously known as the "Finnieston Bridge" or the "Squinty Bridge".
© Yen Baet. All Rights Reserved.
Powered by ZENFOLIO User Agreement
Cancel
Continue