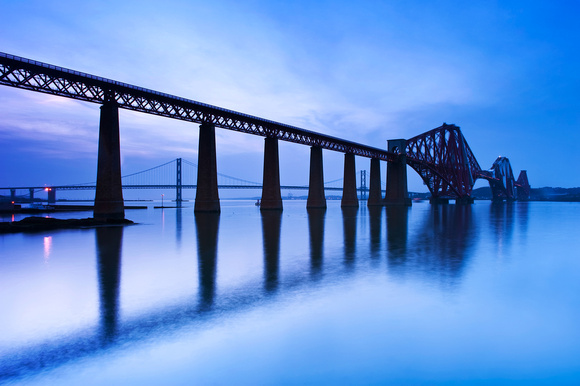 The Forth Bridge is a cantilever railway bridge over the Firth of Forth in the east of Scotland, 14 kilometres (9 mi) west of central Edinburgh. It was opened on 4 March 1890. It is often called the Forth Rail Bridge or Forth Railway Bridge to distinguish it from the Forth Road Bridge although it has been called the "Forth Bridge" since its construction and had for over seventy years the sole claim to this name. The bridge connects Scotland's capital city, Edinburgh, with Fife
The bridge was built in steel alone, the first bridge in Britain to use that material.[5] It was the first major structure in Britain to be constructed of steel;[6] Its contemporary, the Eiffel Tower was built of wrought iron.
© Yen Baet. All Rights Reserved.
Powered by ZENFOLIO User Agreement
Cancel
Continue